The Trippy Hippy band at the Balgowlah golf club

Following their Bali sabbatical, Joe Flower & Harmony Breeze have returned to Australia; Rose of Cimarron is back after touring Scandinavia; Yossarian has returned after ten weeks at a Vipassana meditation retreat; Billy Shears has returned from the grave. The reformed Trippy Hippy Band are main lining Gummy Bears in preparation for a one night only stand at the 19th hole Balgowlah Golf Club, Saturday July 9th. Be there or be somewhere else. It's gonna be humongous, like far out! You'll see.... TICKETS ON SALE NOW https://tinyurl.com/hippygolf

Songwriters in the round at the El Rocco

Following the success of the inaugural Sunday Songwriters-in-the-Round is back with #2! Join Jasmine Beth + Rosie McDonald & Nigel Lever + Peter Miller-Robinson for a cosy afternoon of songs and stories in the round at El Rocco, one of Sydney's oldest venues. Tickets are $20 (online) at this link https://jasminebeth.com/tour-dates or $30 on the door. About Jasmine Beth Jasmine Beth plays original songs about people of all kinds–from problem gamblers to problem politicians. Her main influences are folk and country singer-songwriters of the 1960s and 1970s, including Bob Dylan, Leonard Cohen, John Prine, Tom Waits, Johnny Cash, and Roger Miller. Her single 'The Gambling Man' (2021) was a Finalist in the Great American Song Contest 2021, shortlisted in the Australian Song Contest 2021, and Commended in the UK Songwriting Contest 2021. About Rosie & Nigel (aka The Go Two's) Rosie McDonald & Nigel Lever are both well established in the festival scene, having played in numerous bands and line ups, apart and together. It is the music they play together that shines with an intimate and heartfelt intensity, shimmering in the ether between performer and listener. Rosie and Nigel draw upon the rhythmic and melodic lines that weave through Australian, Irish, Scottish, English and American folk traditions, as well as presenting original material which they are currently recording for their debut CD. Their music is a joyful antidote to current hard times. Rosie (RAPT, Seanchas, Trippy hippy band, Mothers of the Nation band Folklore, Mothers of Intention) on vocals, acoustic guitar, Irish bouzouki and bodhran. Nigel (Willing Ponies, Acoustic Shock, The Three Jimmies, Three Marketeers, Faraway eyes, Karen Lynne band, Mothers of the Nation band) on vocals, mandolin, flatpick acoustic guitar and octave mandolin. https://rosieandnigelduo.com/ https://m.facebook.com/rosieandnigelduo/ https://www.youtube.com/.../UCy.../featured About Peter Miller-Robinson Peter Miller-Robinson is an award winning songwriter and guitarist based in Australia. He is a storyteller with a keen eye for the foibles and folly of human interaction. He draws on a wide range of musical styles and traditions to convey sometimes wry, sometimes poignant musical vignettes. Peter has shared the stage with international and local artists, including Rodriguez, Bo Diddley, Eric Burdon, Chris Smither, Chris Wilson and Stephen Cummings. He is an enthusiastic live performer and has spent recent years travelling in Ireland, England and mainland Europe, playing house concerts, music venues and festivals. https://petermiller-robinson.com/ 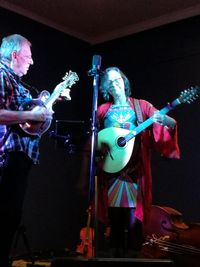 The Go Two's at the Northern Beaches music festival

The Northern Beaches Music Festival is an annual not-for-profit community based music festival that has been successfully operating for the last nine years. It has been created and operated through the amalgamation of four not-for-profit music and folk clubs on the northern beaches: The Shack, Fairlight Folk, Humph Hall and The Fig. The common aim for the festival is to provide the infrastructure and opportunities for musicians and other performing artists to play to an appreciative audience. We are all about supporting live music! We'll be playing twice on Saturday afternoon. Lots of other fabulous acts on all weekend . Stay tuned for details

Tickets will be for sale online https://northernbeachesmusicfestival.org/index.php/contact-us